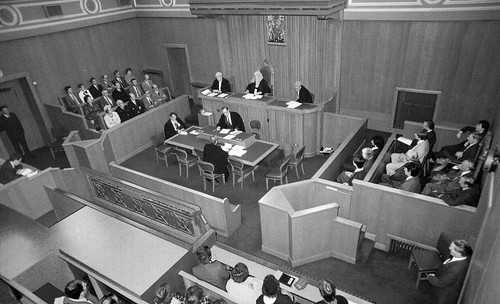 Judges have enormous powers both inside and outside the courtroom. The court is a place of order and respect. Learn some of the things you cannot say to a judge.

Every lawyer, or anyone who has ever been to a court, knows that it is a place of dignity, order, and respect.

Put differently, the court is a place where they handle serious issues. For an adequate determination of those issues, the atmosphere must be such that it allows parties to state their cases without fear or intimidation.

At the center of this courtroom order and decorum is the judge. The judge must make sure to conduct proceedings in a manner that protects the dignity and respect of all the parties involved in the matter.

People who have the opportunity to address a judge, including lawyers and witnesses, must, therefore, chose their words carefully in order not to attract the wrath of the judge.

Some people have raised concern about judges’ powers. Others have accused judges of being too harsh and demanding strict adherence to courtroom procedures.

According to them, the powers given to the judge makes him a king and the court his kingdom and cause them to demand obedience from court goers always.

While it is true that judges have broad powers in and out of the courtroom, most of them are very reluctant to wield it, especially in contempt proceedings.

The respect and reverence demanded in court are not for the person occupying that position, but for the office. Judges do not only demand respect for their offices, but also every other person in court.

Although some judges are difficult and sometimes misuse their powers, it is not a good idea to disrespect them. Lawyers should instead learn ways to handle difficult judges.

Without the powers that judges have to control their courts, it would be challenging to manage proceedings and serve justice to the parties.

While different judges react differently to things said to them, some things are generally frowned upon by most judges. They include the following:

Lawyers should never use words that suggest that they are trying to argue with a judge. It is not in the place of anyone to contend with a judge — not the lawyer, not the witnesses.

Not arguing with a lawyer is not to suggest that judges are never wrong, far from it. But lawyers should understand the difference between argument and advocacy. There are many refined ways of putting across your submissions without sounding argumentative.

“With All Due Respect….”

Many people forget that judges were lawyers before joining the bench. In this vein, they understand that when a lawyer says, ‘with due respect,’ it usually means the lawyer has little or no respect for the judge.

Judges have the laws in their bosom. So when lawyers ask judges if they are aware of this law, rule, or procedure, they are subtly questioning the preparedness of the judge in the matter.

Lawyers should never make comments that seem to challenge a judge. If you feel you know the law or are up to date more than the judge, refer the judge to it.

“The Witness Has Answered The Question….”

There are times when witnesses evade questions either from the opposing lawyer or from the presiding judge.

A judge or opposing counsel may insist the witness answers the question, and some lawyers jump up to object that the witness had already responded to the issue.

This attitude comes across as challenging a judge. As earlier noted, lawyers should refrain from doing that.

“Thank You for That Question….”

Most judges are brilliant people. They know when someone is patronizing them, and no judge wants your patronage.

When you let a judge know that you are not happy with the way proceedings are going on in court, you make the judge see you as an enemy, which is not good for your case.

Unless you are pretty sure that your joke is going to go down well with a judge, it is never a good idea to make one in court.

While some judges are like ‘joke factories,’ churning out jokes in their court, others maintain a solemn mien throughout the proceedings.

Even for judges who like jokes, it is still not a good idea to make one, because you never know when the judge is in a good or bad mood.

“I’m Late Because I Had an Important Meeting….”

One of the common mistakes young lawyers make is to come up with excuses they think the judge will buy.

Lawyers and parties who are late to court come up with all sorts of excuses.

Judges are human beings and can easily relate to most of the things we go through in society, but never give a judge the impression that you have better things to do than come to court for your matter.

Judges take their work seriously. They consider their job as the most important in the whole world.

So no matter how important you think the meeting or appointment that made you come late to court is, never tell it to a judge.

“We Will Appeal This Judgment or Ruling….”

Some lawyers are always in a hurry to display dissatisfaction with the decisions of a judge in open court.

A lawyer should never challenge, criticize, or disagree with the decision of a judge in open court.

Once judges decide a matter, rightly or wrongly, it binds everyone. No amount of your disagreement or criticism will make him change a line of the decision.

The right of appeal from the decisions of a lower to a higher court is a constitutional right, and you need not inform a judge to exercise the right.

Criticizing a judge in open court over his decisions is contemptuous and may jeopardize your other cases before the same judge.

Although court proceedings take place in public, the courtroom is not a public forum or meeting where you are allowed to say anything you want.

A courtroom is a place where you watch not only what you say but also how you say it.

A judge must maintain order and decorum in court. Any word, therefore, that prevents a useful presentation of cases or creates an atmosphere of anarchy is not allowed.

5 Qualities Of A Good Lawyer: Do You Have Them?

6 Simple Ways To Get Clients As A New Lawyer.

The Wig And Gown: Is It Time To Get Rid Of Our Colonial Relics?